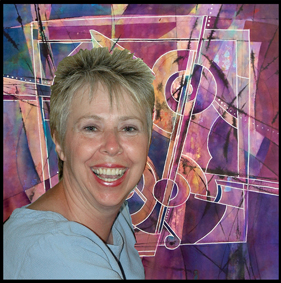 Jo lives in Scottsdale, Arizona, with her man cat, Henry, her quirky dog, Olive, and her supportive husband, Jeff. Her cat Henry, who is her studio assistant and fashion consultant (he cautions her constantly about wearing black), describes her as soft, warm and given to taking afternoon naps. Olive the dog declined to comment. Jeff, whom Olive describes as closely resembling God, refers to Jo as a gargantuan goofball and asserts that he will never understand what goes on in that creative head of hers and doesn’t have a clue about her art. Jo’s family refers to her as one of those “crazy artsy types” and this time, Olive concurred.

Jo refers to herself as an experimental artist. “But isn’t all art experimental?” she is quick to add. Her work has been published in several books and magazines and in 2009 Watercolor Artist Magazine named her as “One to Watch”. When she is not experimenting out in her studio, she is joyously sharing her process and experimental techniques through her sold out classes and workshops. Her students describe her as inspiring, generous, genuine, and passionate as well as the cause of their insomnia. Jo often receives email the morning after one of her workshops from students who confess that they were awake all night from “possibility overload”. Jo usually can’t sleep either as she ponders what a privilege and sacred honor it is to be invited into, and be a small part of, another person’s artistic journey.